Are You Leaking Data When You Browse a Website?

Check to make sure you're using encrypted DNS servers to prevent your private information from leaking. 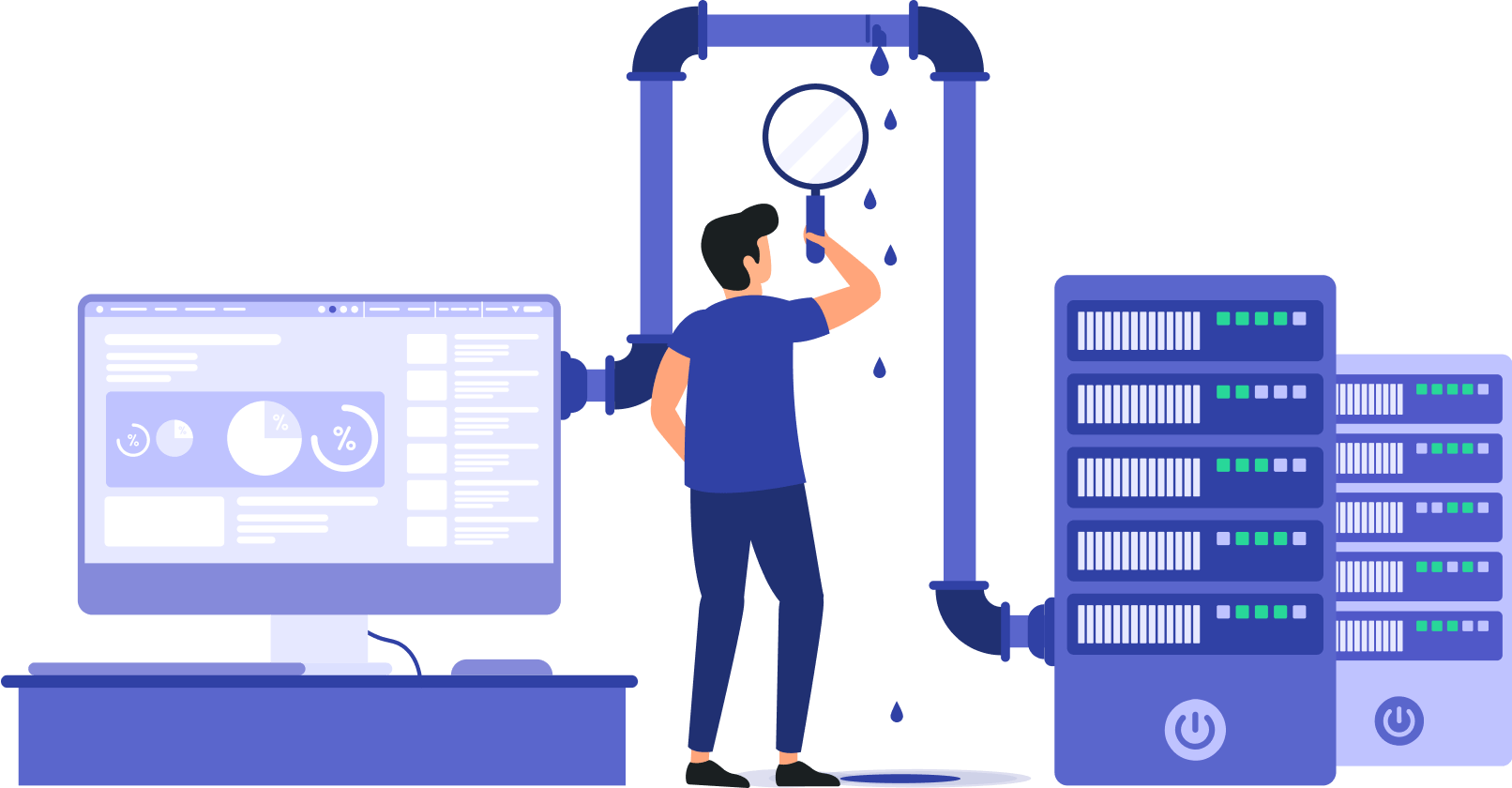 What Should You See?
Interpreting DNS Leak Test Results

Look at the ISP column in the box to the right. If that's the company you get your Internet from, then they could be monitoring what you do on the Internet! You have a DNS leak that you can plug with a VPN.

It's easy to get the best zero log VPN with secure DNS.

Protect up to 10 devices simultaneously.

What's a DNS Leak, and Why Should I Worry About DNS Leaks?

The Internet works by giving every device connected to it an "IP address" that tells other devices how to find them. These usually look something like this: 24.254.19.141*. But if everybody had to memorize a string of numbers just to check their email, it wouldn't be very effective. The solution is the Domain Name Server.

A DNS keeps records of every IP address that has a name attached to it (like gmail.com or privadovpn.com). When you type in the web address, your computer asks your ISP's servers what IP address is connected to that name, then gets the data to display the web page.

The Problem with Logging

The problem is that your ISP then has a record of which website you went to. Depending on what country you're in, the government can ask for those DNS requests and the ISP has to hand them over.

And since net neutrality ended in 2016, if they don't like a specific site, they can slow down how fast you load it if you don't have a VPN. This is an even bigger deal with streaming sites, which can be made unusable if your Internet service provider decides they don't want you to make that connection.

Why You Need a VPN

By connecting to the PrivadoVPN network, you don't have to worry about that. Instead of using your ISP's servers, you'll use one of our encrypted ones to prevent a DNS leak from putting your private data at risk. This VPN feature keeps anyone from seeing what sites you want to access.

As a no-log VPN, we don't keep any records of your activity or IP addresses, so you don't have to worry about governments getting that data.

A DNS leak is a problem that a VPN might have where, instead of using a secure Domain Name Server, your request goes to the default one with an unsecured IP address. We avoid DNS leaks by making sure that all of your information is encrypted before it leaves your computer and is sent through an encrypted tunnel to our DNS servers. We also have a Kill Switch feature that will stop all of your Internet activity if you're disconnected from the VPN so you don't even accidentally use the default server.

You can test DNS leak vulnerability with the tool above.

How Does a DNS Server Work?

There are actually four types of server involved in any sort of DNS query: DNS recursor, TLS nameserver, root nameserver, and authoritative nameserver. It's not strictly important how each of these work, but know that every one of them can potentially result in a DNS leak with a VPN.

When you try to go to a website and type in the URL, your computer will first go to a DNS server and ask it what IP address is connected to that name. The DNS server will check its records and tell your computer where to go to get the information you want.

The whole process takes 8 steps, but it happens almost instantaneously in most cases.

What is a DNS leak?

A DNS leak is when your default DNS server is unsecured, despite having access to a secure one. The Internet is wide open if you know how to look, and without an encrypted connection, anyone can watch your activity online.

A service like a VPN goes a long way toward preventing those types of issues by routing all traffic through a secure server. Sometimes your Internet provider might still try to make you use their DNS servers so they can continue to track you. That's why it's so important to use a no log VPN that will make sure you always access secure servers online.

What does a DNS leak test look for?

A DNS leak test runs a query and sees what comes back. It's fairly simple to perform and doesn't take long.

What this test shows you is whether you are using secure DNS or not. If your query passes the test, the resulting information should not show your actual ISP or IP. If the test does have your location, ISP, or other identifying information, your connection is vulnerable to spies online. A VPN could help improve your security and privacy by fixing this.

How can I protect my device from DNS leaks?

The easiest and most effective way to protect your device from a DNS leak is by using a virtual private network (VPN). A VPN guards you from leaks by making sure that your device never uses an unsecured DNS or one controlled by your ISP. Instead, a good VPN will have their own secure servers and use those rather than the default ones from your Internet provider.

On top of stopping DNS leaks, a VPN also offers a number of other benefits, including effective masking of your connection (IP address) so that you can't be identified online. And all of your data will be encrypted by the VPN during transit from one computer to another, that way you can be sure that nobody will be able to see your online activity, no matter what device you use.

In short, a VPN is the best way to prevent DNS leaks. Take our VPN leak test to get a better idea of whether you need DNS leak protection.

What is the best free VPN to stop a DNS leak?

I don't think you'll be surprised to learn that we think the best free VPN for avoiding DNS leaks is PrivadoVPN. On top of using our own secure servers, we also offer the following benefits to our free users:

PrivadoVPN can be used on several devices including your computers, cellphone, tablet, or TV. So long as you're using the VPN service, you can be confident in greater security and Internet privacy due to dns leak protection.

See What Our Users Have to Say

Excellent job and I am totally...

Excellent job and I am totally satisfied with the product.. Courteous and knowledgeable customer care service were fully equipped with technical support skills and well trained staffs. Congratulations you all did a fantastic job and keep it up.

After a week of using your VPN...

After a week of using your VPN, I can say this one is the best of all free ones I've tried so far. Yours is quick, no interference with PC software (others had). Thank you for your work!

This is the best VPN i have ever used.

This is the best VPN i have ever used.

Wanted a free basic VPN.Used Nord before but I find this more user friendly. Does the job. Excellent piece of software

A very reliable VPN, offering a lot of different int'l sites, and a good speed. Try it!

Now you can protect up to 10 Internet connected devices with a single PrivadoVPN Premium account. You no longer need to worry about whether to activate your VPN on your laptop or your phone, you can protect them both, as well as the phones, tablets, and streaming media devices of the rest of your family.

Protect all your desktops and laptops from spying and anonymize your online activity on multiple simultaneous connections at home or out and about with the PrivadoVPN app.

On a phone or a tablet, you can make sure that everything you send and receive on it is encrypted, sent through a secure tunnel, and routed through our extensive network of global servers.

Whether you're watching on an Internet-ready TV or using an add-on device, you can ensure you're getting private Internet access and safe connections with PrivadoVPN.

You don't have to choose what devices to protect while you're at home. Install PrivadoVPN on your router and protect multiple devices connected to your network.

PrivadoVPN Offers All of These Amazing Features

Never get locked out of regional content again. Use the free PrivadoVPN app on up to 10 connections at the same time with a premium membership and know that your connection is secure whether you're chatting on your phone, watching a video on your TV, or browsing the 'net on your laptop. Build an encrypted tunnel right through to that show, movie, or video.

PrivadoVPN has a premium network and we own a lot of our own equipment. We use the latest protocols, industry leading architecture, and a dedicated development team to make sure your private information stays private while not slowing you down. You don't sacrifice performance for privacy with PrivadoVPN.

Set up the PrivadoVPN SOCKS5 proxy on your favorite download client to get the fastest possible speeds with a secure IP address. Keep your file transfers safe and anonymous without sacrificing speed, no matter who's looking.

Get access to cities in countries, so you can be virtually anywhere, including Amsterdam, Chicago, Hong Kong, or London. Bypass government censorship and unlock content wherever you happen to be.

Easy to Use Apps

It's simple to use PrivadoVPN. Just download any of our free apps for Windows, Android, Mac, iPhone, iPad, Android TV, or Amazon Fire TV Stick. You'll be able to protect your data with the push of a button.

Decide which apps get the full protection of PrivadoVPN and which don’t need it with Split Tunneling. This feature gives you complete control over how your data is encrypted while you’re online, app by app.

Pick a Plan to Set Your Virtual Location

Use Only Secure Servers with a Premium VPN like PrivadoVPN